And that was in 2005, when the first half-face transplant of a 38-year-old woman, Isabelle Dinor, took place in France, who had been bitten by her dog while trying to wake her up from a coma, and the operations continued thereafter.

The first full-face transplant was performed in Spain in 2010 for a man whose face was deformed by a gunshot wound, completely damaging his features. A medical team of 30 doctors from Dhebrón University Hospital in Barcelona was called in to perform the 24-hour transplant, but full face transplant is a greater challenge involving more than 30 muscles in the facial movements. It takes 17 muscles to smile.

Surgeons will have to save not only the donor’s skin, but also the nose, mouth, lips, eyebrows, eyelids, subcutaneous fat, certain muscles and the lower part of the nose and nerves. Then they will have to connect all of this hard-earned material to a person who is almost unrecognizable because of burns or scars. The recipient will then need a lifetime supply of immunosuppressive drugs to maintain the new face.

Some burn victims have undergone more than 50 skin vaccinations to rebuild faces that they believe are still hopelessly deformed. Surgeons argue that total face transplants will produce better results.

Since the process takes several months to complete before the medical team decides on the success of the operation that has been performed, at this stage, the nerves must be healed, as facial transplant processes require more effort and time than any other organ transplant, as they involve transplanting skin and muscles and attaching veins, arteries and nerve cells that allow the patient to move facial features easily.

But the face transplant process is still rare in the medical field, where less than 40 operations have been performed worldwide so far, and six patients have died after the operation, their bodies refusing to accept this new face.

“The main problem with these people is conforming to their new look. And they still have to accept the new look. Why would they do that? If they had to accept a new identity, they might accept it too,” said Peter Row, chairman of the ethics committee of the British Organ Transplant Society. Their changing identity is like another person’s identity. “

In recent years, the story of “Katie Stapfield“, 21 years old, who became the youngest person to receive a face transplant in the United States of America and owner of the longest face transplant process that lasted 31 hours, as well as most of the American news sites interested in Katie’s story, have spread, but National Geographic “I wanted to clarify and document all aspects of the story from a human and medical point of view. National Geographic published the cover of the September 2018 issue of the magazine under the title “The Story of a Face,” and National Geographic “published a documentary film that details Katie’s journey over a three-year period, in addition to having these details in pictures on its website. 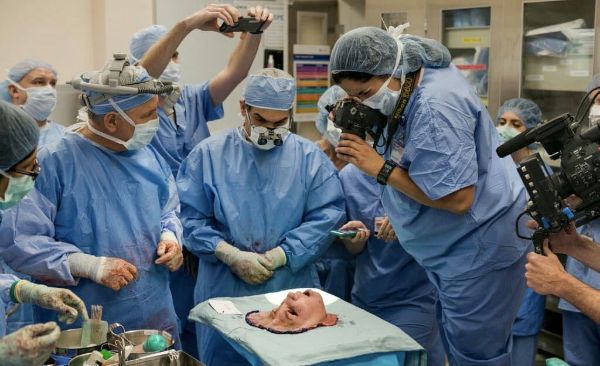